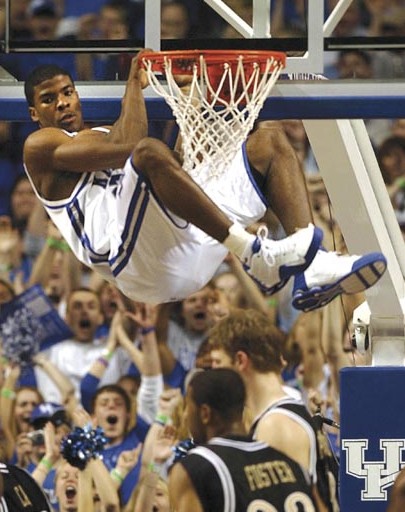 Sorry.  It's still me.  He hasn't come back.  So, as you sit inside trying to escape the cold and, for some of you, rejoice in the cancellation of final exams, the painful cold reality still remains.  But, in an effort to warm you up a little bit, why not pay tribute to the beefy muscles and big heart of Kelenna Azubuike, who turns 27 on Thursday.  In his three seasons in Lexington, which came after scoring an obscenely large number of points in high school, he had his ups (All-SEC and two Elite Eights) and his downs ("looks like Tarzan, plays like Jane").  He broke the hearts of many when he chose to leave after his junior year and went undrafted, but showing the grit and determination that seems to be the backbone of every former Tubby Smith player not named Randolph Morris (who is doing work with Steve Francis and Sun "Skyscraper" Mingming in China), Azubuike turned a D-League tour into a solid NBA career with the high-scoring Golden State Warriors.  Now, as a New York Knick, he's battling a knee injury that could potentially end his Knicks' career as he likely won't play in this final year of his contract.  But, no matter what happens, we'll always have our UK memories and we'll always have that African Summit where he was chosen to speak with Jesse Jackson.  Happy Birthday, Mr. Biceps. Now onto some UK news...  - Perhaps the biggest story in what was a pretty slow Wednesday in the world of UK basketball was also the strangest.  We've gotten accustomed with Calipari doing his thing overseas, but on Wednesday, Coach Cal went international in a different kind of way.  Calipari was named as a finalist for the United Nations NGO Positive Peace Award after he was nominated by Samaritan Feet, the group that helped him supply shoes to Haiti and partnered on feet washing efforts in Haiti and Portland.  It's a tremendous honor and shows us in a slightly different way how Calipari "gets it".  I'll be the first to admit that one of the things that has been such a pleasant surprise to me in Cal's time in Lexington is the way he engages the community and the lengths that he goes to be charitable.  It's something we've had the pleasure of seeing for the last year and a half and, with this award nomination, hopefully the world gets to see it as well.  - For the past 48 hours, my life has been consumed by an obssessive urge to get to the bottom Oscar Combs surprise that he's been hinting at on Twitter.  The godfather of Kentucky media has said that Saturday's game will feature a moment that could be the "most enjoyable" of his 50 years of covering the Cats.  Will it be a jersey ceremony?  A celebrity "Y"?  The return of the dance team's white pants?  I'm not sure.  But, I do know that when Oscar is Tweeting, I'm listening.  I'd advise you to do the same.  - It's been oddly reminiscent this week of the old Billy Clyde and Tubby days as we've allowed a couple of recruits to captivate us in a "what's the latest?" kind of way.  Both DeAndre Daniels and Trevor Lacey are rumored to be close to making a decision with many believing that Lacey and his golden jumper being the most likely of ending up as a Wildcat.  It was reported Wednesday that Daniels would visit Texas this weekend and still plans to enroll early.  But, according to Eric Bossi of Rivals, Daniels' decision to enroll but not play until next year likely favors Kansas, as the playing time would be much more available this season at UK than next.  - For those of you still focused on the excitement that is the BBVA Compass Bowl, there could be potentially be a fairly familiar face on the opposing sideline.  Reports late Wednesday said that Miami of Ohio coach Mike Haywood, who got his head coaching career started with a loss to the Cats in Paul Brown Stadium, will take over for Dave Wannstedt.  However, Wannstedt was given the option to coach the bowl game and his assistants belive that he will, which means Haywood might escape getting his second coaching gig started with a loss to Kentucky as well.  - As a quick note, baseball Hall of Famer Bob Feller passed away late Wednesday at the age of 92.  As most of you know, I'm a giant baseball nerd and Feller was one of my favorite old baseball players when I was younger and was even the subject of my first book report, which included dressing up as him.  That has nothing to really do with anything, I just wanted the bunny guy to know it's ok to dress up sometimes.  - Finally, Matt sat down with Mitch Barnhart Wednesday to discuss a number of things, including the possibility of some upgraded football facilities.  Matt will stop by later this morning and discuss what UK's AD had to say, but only after we have one of those weird, uncomfortable interactions like when Ricky Bobby came home and found out Cal had moved in with his wife. That's it for now. Stay tuned throughout the day as we do our best to keep this ship afloat.  In the meantime, kill some time with an old familiar voice and check out the Kentucky Sports Radio podcast below.