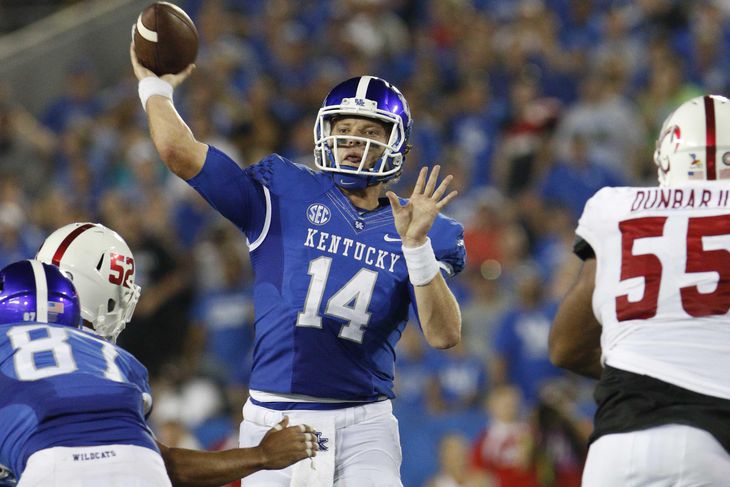 Mark Zerof-USA TODAY Sports[/caption] The first AP Poll of the regular season was released earlier today and it featured a record 10 teams out of the SEC. The conference went 12-1 to kickoff the college football season and as a result Texas A&M and Mississippi State vaulted into the top 25. Kentucky's schedule isn't looking any easier as they prepare to take on 5 of those 10 ranked teams. Here's an updated look at how the Cat's opponents are ranked: 6. Auburn, Even Auburn didn't look like the titans of the SEC that many hyped them up to be in a win over Louisville. Jeremy Johnson proved to be a poor Cam Newton impersonator with 3 interceptions and inconsistent throws . Their narrow win over the Cards certainly fuels the puncher's chance that the Cats could pull off a shocking Thursday night upset in just over a month. 10. Georgia, Down 1 They called this game with 10 minutes to go due to lightning and the Dawgs still put up over 240 yards on the ground with 4 touchdowns. They have more great running backs than most conferences. 21. Missouri, Up 3 They got their game against an FCS opponent in and survived unscathed despite a hard, targeted, hit to Maty Mauk. The Tigers rise up the ranks thanks to the exit of Wisconsin, Arizona State, and Stanford rather than an impressive performance on the field. However, with a weak schedule you can expect Mizzou to remain undefeated until they come to Lexington to end the month. 23. Tennessee, Up 2 The Vols gave up an SEC-high 557 yards to Bowling Green in a 59-30 win.  Much like Kentucky (for 40 minutes), their offense looked great while their defense left much to be desired. We will find out if the Vols are a true SEC east contender this weekend as they host #19 Oklahoma. 25. Mississippi State, First Appearance The other Bulldogs crept into the rankings today in order to build hype for a match-up with #14 LSU. The Tiger's first game was cancelled so they will begin the season in Stark Vegas where the Dawgs need the to win to prove last year wasn't a fluke. Last year's game featured a furious rally by the Tigers only to come up short. We will know what kind of team Dan Mullen has after this weekend.  33. Florida, 8 votes Florida earned some votes this week after putting up 600 total yards of offense and giving up just 1 yard during the second half. To be fair, they did the exact same thing against Eastern Michigan to begin last season so you can read into that what you will. The Gators host East Carolina this weekend before coming to Lexington for the biggest game on our schedule. 38. Louisville, 4 votes Freshman Lamar Jackson was named the starter for the week 2 match-up against Houston which means the school you hate the most now features the type of quarterback you hate the most. Fun. The Cats couldn't do anything when ULL's Jalen Nixon was in the game running the read option so Jackson's rise to the top of the depth chart is problematic. However, November 28th is a long way away and right now there are bigger fish to fry. Unranked: South Carolina Bottom line, if Kentucky is ever going to move up the ranks of the SEC then they have to start beating South Carolina consistently. This year they face the Gamecocks on the road but this isn't the same USC team that we've seen over the past 5 seasons. Their defense gave up 440 yards to UNC and looked exploitable by Patrick Towles and the receivers. It's time for the Cats to claim their first SEC road win since 2009.   How do you think the schedule looks after the opening weekend of football?