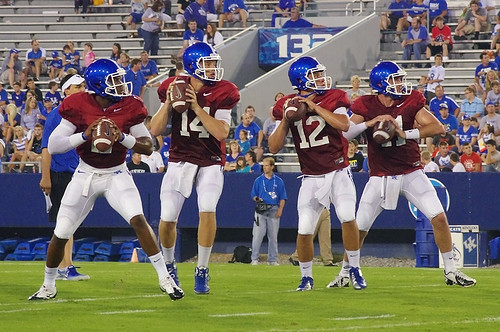 During his interview with Matt Jones on Kentucky Sports Radio radio this morning, Mark Stoops talked in depth about his quarterbacks, the hottest topic in the state of Kentucky right now. He said his quarterbacks certainly need to play better, and they know that, but they can't do it alone; the pieces around them need to step up, too. It's tough when the QB bounces back from a bad throw with one right on the numbers, only to see the receiver drop the ball. The coaches are pressuring everyone on offense to step it up. Stoops also had some good news regarding his starting quarterback, Max Smith. The shoulder injury he suffered in the Louisville game is not the same or related to the nagging shoulder injury he rehabbed all summer. This one is in a different area and they expect him to return soon. However, if Smith's injury is more severe than it appears now, they're okay with pulling the redshirt off Patrick Towles if Jalen Whitlow isn't getting it done by himself. Right now they're working to get Jalen more confident in his arm, started faster, and looking for ways to settle him down. We'll have more from the Stoops interview in just a bit. Go Cats.