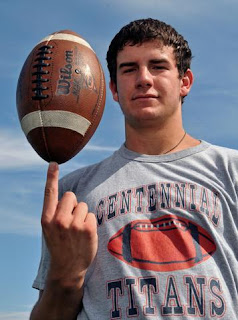 The rumor mill started churning this afternoon as whispers that Kentucky quarterback Ryan Mossakowski has decided to transfer from the program gained traction.  I contacted his father this morning and have asked around but have received no official confirmation.  WLEX, though, says that their sources are telling them that Mossakowski has cleaned out his locker and decided to transfer.  Mossakowski is a former four-star recruit and was rated as the second-strongest arm in the class of 2009, behind only USC's Matt Barkley.  He redshirted his freshman season after shoulder surgery and was expected to play for the baseball team this spring and battle for the starting quarterback position with Morgan Newton.  He chose UK over Alabama, Auburn and Texas A&M in 2009 and would most likely head to a JuCo and then take another stab at the recruiting process. UPDATE:  Mossakowski's father confirms has confirmed that he is transferring.