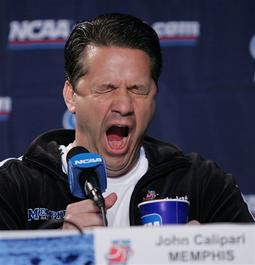 Calipari's been busy hitting all the recruiting spots from Texas to Wisconsin to Georgia and everywhere in between. Meanwhile, the rumor mill has been churning at ridiculous speeds and it's decision time for a couple UK recruits, so we've got a few notes to get to:

- The biggest thing going on this week is obviously the decision of Marquis Teague. Pitino visited Marquis earlier in the week as he once again makes efforts to try to seal the deal with Teague. I know this is going to sound like a bad joke, but this honestly has to have Pitino feeling like he's lost his mojo and can't close the deal like he used ta could. The rumor mill is absolutely pumping with people saying he's going here or there. I'll take the easiest, and coincidentally the smartest, route and say that he's still undecided. Calipari is making a visit to Teague today and that only tells me that anyone saying he's going here or there is speaking a bit prematurely. It'd be better to ask whether Calipari can pull some more of his recruiting magic and show Pitino how closing the deal should be done. D-day is t minus 24 hours away...

- The second decision will be occurring today and it involves Zach Peters. Peters was once ranked as the #1 player in the 2012 class, while he was an 8th grader, but now Hoop Scoop has him as the #80 prospect in that class. However, that hasn't hurt his attention from coaches. Bill Self, Calipari, Roy Williams and Rick Barnes has all shown him plenty of attention. The well of information on this kids decision is pretty dry but most seem to believe that Kansas has the edge in this one. However, that information came before Peters received a visit from Calipari this week.

- The other movement occurring this week deals with Marcus Thornton, the newest forward on UK's list after his decommitment from Clemson. Thornton told Dawgpost.com that his top three were Kentucky, Memphis and Georgia but after taking Memphis off his list he gave the AJC a final seven of Kentucky, Georgia, Georgia Tech, Clemson, Alabama, Texas and Michigan. Calipari met with Thornton and his family this past weekend and UK looks in good shape to land a nice looking prospect to help them fill the voids on their depleted roster.