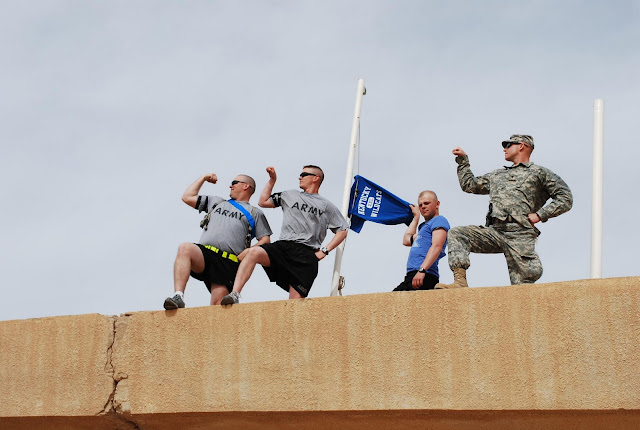 Pictured above are a group of Kentucky National Guard soldiers from Paducah that love Kentucky basketball. They raised the UK flag in Iraq and posed for the customary John Wall Dance photo. I know the dance has been watered down, but these guys deserve all the credit for what they are currently doing. Here are some comments from one of the guys on the Kentucky National Guard blog: “For the games that weren’t televised in Iraq, I had my wife Jenifer put the Webcam on our TV at home so our guys could watch it on my computer here. At the same time, we had the score streaming and the University of Kentucky commentators on CBSSports.com,” said Spc. David S. Cavitt, armor and weapons expert for the 2113th TC.  “The funny thing was each source was seconds apart, so we were cheering three different times for the same play. We would see the streaming score, hear the commentators, and then see the play.  It was great,” he said. Good stuff from a group of True Blue fans that are currently in Iraq. My Sweet 16 Picks: - Tonight: Syracuse, WVU, Kansas State, Kentucky - Tomorrow Night: OSU, Baylor, Northern Iowa, Duke One Recruiting Note: - Evan Daniels of Scout.com broke the news today that North Carolina has entered the recruitment of Austin Rivers (2011) and are now considered strong candidates to land him