Evan Hilbert
OK, so, during the dragging, sweaty, uncomfortable months of summer, we flippantly mentioned that we would be profiling every player on the team. It will only be fun and worthwhile, we decided, if we were both informative AND funny. Well, it would be really fun if we were drunk the entire time, but that's neither here nor there. Thus, for these ten weeks leading up to the UL game, we will have at least one profile a day. We hope you enjoy these as much as we enjoyed the idea of doing them, but not the actual task. Oh, and we see the egregious "that's what she said" in the headline. We'd also like to use this italicized space to apologize to the families of the players whose last names end in 'A' or 'B' because these early ones might suck a little. 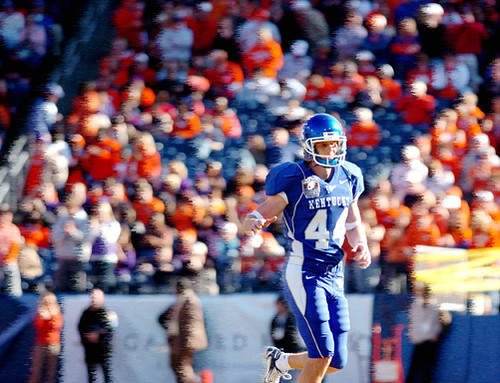 Boring, Obligatory Vitals Height--6'2'' Weight--203 40--N/A Year--Senior Position--Punter Hometown--Murray, KY (Murray) Unfair comparison to NFL-er: Name a punter. I'll say Jeff Feagles, only because he's like 200 years old. Most interesting fact from his media guide bio: He's like the male, football-playing version of Mother Teresa. The "Community Cats" portion of his profile reads like the Federalist Papers--very long, and I don't know exactly what anything I'm reading means. All joking aside, his commitment to public service deserves recognition, so I'll type out all of his awards and service endeavors to exhibit their abundance: 2nd team Academic All-American, Frank Ham Society of Character, holiday bell ringer for the Salvation Army, volunteer at the AirOne radio food drive, member of the save Darfur coalition, volunteer at St. Jude's Childrens Hospital, participant in the FreeStore food bank hunger run/walk, participant in the American Cancer Society's Relay for Life, often visited the American Cancer Society Hope Lodge, provided Christmas meals for the underprivileged of central KY, provides food for local elementary school students, provides food for students in Haiti, went on an education/service trip to Ghana, visited schools/orphanages in Ghana, and has been a guest speaker at numerous community events. He also plans to join the Peace Corps after college. Well, that makes me feel bad about myself. Eat your heart out, Tebow.  Something we made up about him: Only cares about himself. Items of legitimate interest: Described by his high school coach as the best athlete to ever come through Murray HS, as he was All-State in both football and soccer, as well as being All-Region in baseball. He averaged almost 40 yards per punt last year, good for seventh in the SEC. He led the SEC in touchbacks last year, serving as the kicker-offer...guy. Outlook for 2008, based on light research by our minions: More of the same expected this year. May get some pressure from redshirt freshman Ryan Tydlacka. Here he is showing off the cannon: