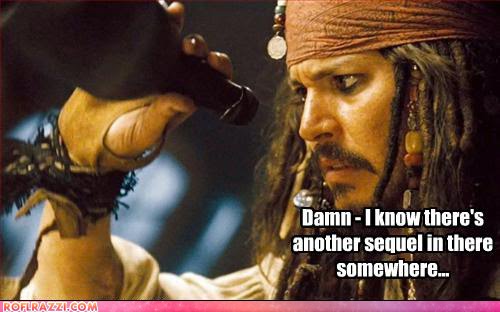 It's Memorial Day weekend. If you aren't grilling out, ducking away to the lake for the weekend, or karaoking in patriotic gear (oh, just me?)... chances are you will probably find your way to a movie theatre at some point this weekend. Memorial Day weekend is notorious for new movie releases, especially from the category I like to call "why do people like mediocre movies in the summer?" Memorial Day weekend tends to mark the release of the first big action blockbuster movies of the summer. This year, two of the weekends' biggest movies are sequels. Many of you are probably planning to either see the Fast and the Furious 32 this weekend, or the Hangover (I refuse to give them separate numbers, because they are just the same movie taking place in a slightly, slightly different setting). I do have faith though that the 3rd in the line of the Hangover movies will be better than the 2nd. I mean, it has to be right?   And now on to the news and views from the day...  Today was Charles Ramsey Day on KSR. Although Ramsey showed up a little late and caused Matt and Drew some understandable stress, he delivered exactly the kind of interview you would expect. Ramsey was candid, honest, funny, a little scary (kicking heads and plotting for demises), very much a fan of McDonald's, etc. Ramsey had a few touching comments and also managed to give Rex Chapman a shout out. What more can you really ask for? If you haven't had a chance to listen to the podcast yet, you won't be disappointed. Have a listen here.   With the news coming out yesterday that the core of Kentucky's basketball team next season decided against playing for Team USA this summer in order to spend more time in Lexington preparing for a national championship, it's hard not to get excited about the focus and goals that this team clearly holds for next season. The expectation level of the fan base is on par with the expectations before the 2012 national championship season. The buzz and excitement matches the expectations. It's nice to see that the star-studded incoming recruiting class and some of the returning veterans are ready to get to work together this summer.   The real loser in this situation though? Billy Donovan. Donovan was probably excited to add some of Kentucky's star class to his roster for the trip to Peru. Team USA will lack some of its best potential players now. The team simply won't be as good as it would have been. For Billy though, it will be a lot like the feeling pretty much every season since the graduation of Joakim Noah and company. He's used to it.   One member of Kentucky's 2013 class, Marcus Lee, expressed the laser-like focus he and his teammates have on accomplishing one goal and one goal only: winning a national championship. Lee spoke with Larry Vaught about the lofty goals:

"Winning the national championship has gone through our minds. Now it's stuck in our minds. That is all we plan on doing, especially since we are all big competitors. We will refuse to lose next year."

Lee also talked about how excited the guys are to get on campus, which is a big reason why they turned down the Team USA invitations. Lee even said that some people are probably tired of hearing the guys in the class talk about Kentucky constantly. "If five of us are not talking about Kentucky, the sixth one will be."  3 things I love about the demeanor/perceived attitude of this recruiting class: 1) They do not remind me of last year's team at all. 2) They seem almost competitive to a fault. How good will those practices be next year? These guys are going to push each other day in and day out. 3) They are genuinely excited to come to Lexington.     While the 2013 class has already been solidified and looks forward to congregating in Lexington, one of the prized members of the 2014 class spoke out positively about John Calipari today. Emmanuel Mudiay, largely considered to be the best point guard available in 2014, likes Coach Cal and it's not just his ability to coach the game of basketball. Mudiay thinks that Cal has a "big heart." Mudiay says he has the same kind of heart as well.

"You'd think that we talk about how I can help Kentucky and basketball things like that, but we don't. ... He moreso talks about what I should want to be in life period..."

This guy sounds like Nerlens Noel 2.0. And if Cal is having these types of discussions with all of the recruits, that has to be a mother's dream, I would think.     On the football side of things, a few interesting tidbits came out today: 1) Matt Elam says that with the schools who are recruiting him the hardest, it's essentially a 3-horse race between Kentucky, Louisville and Alabama. How often do you hear Kentucky (or Louisville for that matter) in a final 3 list with Alabama? Elam is that good, and Kentucky has put itself in good position to be a final contender for his services. 2) 3-star Offensive lineman/Offensive tackle Ty Barrett out of Dallas, Texas has cut his list of schools to 7 via Twitter. Kentucky made the list along with some other big names: Oklahoma, Oklahoma State, Kentucky, TCU, Texas Tech, Baylor and Ole Miss. 3) 3-star Safety Mike Edwards out of Cincinnati, Ohio also used Twitter to announce his top 6 schools. Edwards was once thought to be headed to Kentucky, but the tides changed a bit recently. Kentucky is still in play though: Nebraska, Vanderbilt, Louisville, Kentucky, Wisconsin and West Virginia 4) 4-star WR Derek Kief out of Cincinnati, Ohio also trimmed his list to 5 on Thursday. Kief showed his creativity by using a nifty (haven't used that word since i was carrying about a L.L. Bean backpack with my initials on it in 7th grade)  graphic/rap lyrics. Kentucky also made the list, along with Notre Dame, Ohio State, Northwestern and Alabama. That's 2 big time players in which Kentucky and Mark Stoops are going toe-to-toe with Alabama for... Is that a sentence you expected to read about 2 years ago?

5) The National Football Post released their rankings so far for the class of 2014. Despite the early rankings, Kentucky cracked the top 25 with the #21 ranked recruiting class in 2014.     When not busy hitting the recruiting trail, Mark Stoops took a break to talk to ESPN's Edward Aschoff about the spring practices/game. -"It went very well. We got a lot of work done. We still have a long way to go, but I was excited. Our players had a great attitude, worked extremely hard and we got a good start on things." -"We have to be more physical, but I feel like our coaches approached it the right way. We were as physical as we could be in the spring. We're looking forward to having a great summer...getting bigger, getting stronger." -"We're still packed up there (referring the quarterback race). Jalen had a real nice spring game. He gives us that other dimension with the running."- -"I was excited about Raymond (Sanders). I was happy with him."    John Wall and Anthony Davis have both been invited to Team USA mini-camp this summer. Even though Coach K said that he was going to hang it up with the national team, he has signed on for another round. Gary Parrish of CBS Sports believes that John Calipari will be 1 of the next 5 college coaches in the running when Coach K gives it up.  The 5 names? John Calipari, Bill Self (Kansas), Billy Donovan (Florida), Tom Izzo (Michigan State) and Brad Stevens (Butler). Parrish on why Cal would work:

"Calipari is a master of convincing great players to play hard and well together, even if this past season flies in the face of that statement. Yes, I know, he's widely considered to be a "failed NBA coach" because of his stint with the Nets. But Calipari has changed so much since those days, and he's much better suited to manage egos now than he was when he got his first NBA job at age 37."