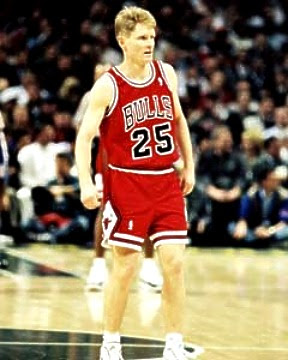 Steve Kerr's professional resume includes five NBA titles, one NBA Three-Point Shootout championship, a game-winning shot over the Utah Jazz and, unbeknownst to me, a spot as a columnist on Grantland.com. Kerr's most recent literary work for Bill Simmons' website is a case for why the NBA should stretch its age limit to 20 years. Kerr says it's not just personal experience -- it's common sense. Marketing is one of Kerr's six reasons for the 20-year limit:

4. Marketing In the old days, college basketball was the NBA's single best marketing tool. Nearly all of the league's future stars were well known by the time they were drafted. I'll never forget watching the lottery in 1985, when the Knicks won the right to select Patrick Ewing with the first pick. NBA fans had followed Ewing for four years as he dominated college basketball at Georgetown; by 1985, they couldn't wait to see him on a bigger stage. They knew that whichever team landed Ewing would contend for the next decade, at least. This was a common occurrence back then: college stars like Jordan, Bird, Magic, Hakeem Olajuwon, or David Robinson entering the league to great fanfare and anticipation, poised to change the fortunes of franchises immediately. How often does that happen today? Even if Washington fans were excited to draft John Wall two years ago, and Cleveland fans were ecstatic about picking Kyrie Irving last year, none of them were actually thinking, We're back! Look out, playoffs!

Read his entire case over at Grantland.com.