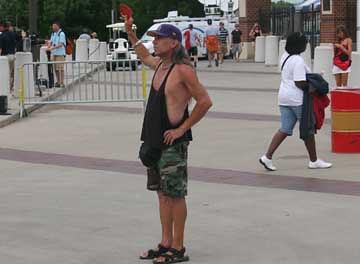 A typical Louisville fan trying to scalp his basketball tickets. Note the empty lot. As an aging UK Alumnus, there is one particular downside of the recent UK basketball resurgence: Ticket prices. Last year was one of those rare seasons where UK basketball tickets were more abundant than bad Jersey Shore references in the blogosphere (Self-fulfilling sentence activated). It seemed like every Jim-Bob or Jolene Kentucky Fan had a couple of extra tickets he or she was looking to unload a few days before a game. These bad boys were typically being offered at face value and generally in a decent location. You could hardly walk into a Thorton's gas station or Jerry's Restaurant and not have some old-timer nearly assault you with ducats. If you had never experienced Rupp Arena, it was a great time to see the cathedral of college basketball on the cheap (even if the choir was singing a bit off key). My particular windfall came last January mere hours before the UK-South Carolina home game. My brother-in-law called saying his neighbor was looking to unload his seats and couldn't find a buyer. The neighbor only wanted face value. The location? Lower arena about 10 rows behind UK's bench. Bwah? I snapped them up and was able to witness Devan Downey assassinate the Big Blue in the final seconds of a crucial SEC game. Obviously, we weren't tough enough to win, but the seats were great and I had an absolute blast. It was one of the few times I have been that close to the action which is saying something as I have been to Rupp well over 100 times. Flash forward less than a year and the difference couldn't be more stark. Calipari has the Wildcats rolling and the team has achieved rock star status. Columnists everywhere, from Bill Simmons to Pat Forde are talking and writing about our talented freshmen. All that hype and excitement has translated into dollar signs for scalpers and season ticket holders everywhere. I was determined to see the game from a decent spot in lower Rupp arena sometime this year. . before I started checking prices on Craigslist and Stubhub. For pedestrian games against Arkansas and Georgia, lower arena tickets were going for $300-$600. . .EACH. For bigger games like Louisville or Vanderbilt, the lower arena prices were exceeding $1000 a pop. I quickly gave up my attempt to watch the Cats play at home and turned my attention to the road. Surely, I could travel to a game, stay in a nice hotel, and snag some lower arena seats for far less than cost of attending a game at Rupp. Not so fast, Johnsey (/Corso). Apparently, every other UK fan had the same notion. The Wildcat road show is an absolute force and fans of both teams (UK and their opponent) are snapping up tickets like crazy causing ticket prices to skyrocket. Lower level tickets for the recent Vanderbilt game were starting in the $300 range on Stubhub and soaring from there. The game at Auburn didn't have any tickets under $150. Check out this site that examines what I like to call The Big Blue Effect. There is an expectation that the ticket prices for the NCAA tournament will be higher than normal based on UK fan interest alone. Here at ground zero, the average ticket price of the Louisville game was $430. Considering that most tickets in upper Rupp didn't go for nearly that much, that is an incredible number. So where does that leave me and those of my ilk? Older guys that no longer have valid student IDs, don't have enough K-fund points to buy grandstand seats for the Rifle team, and are apprehensive about the vertigo and cramped accommodations of upper arena seating? I guess we'll just have to tough it out at home with our HDTV and refrigerator full of PBR. You know? Given the choice of watching a bad team in person or a transcendent team from the comfortable confines of the Johns hacienda, I think I'd rather have the latter.