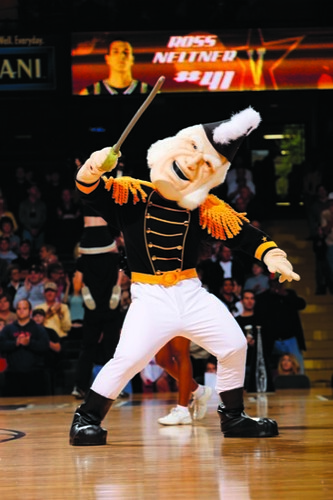 When 'Dores take to the floor this evening, these are the five guys you're going to hate the most and what you need to know about each:

#4 AJ Ogilvy, 6-11, Junior, Center Stats: 13.9 ppg, 6.1 rpg, 1.6 bpg Pick you reason to hate this guy: He's hurt UK in the past, he's Woo's Cousin, he epitomizes "no way he can play" basketball players,  he has golden locks that only Jimmy Dykes can love or he looks like Matt Jones. Whatever your reason, you're probably going to do quite a bit of hating on this guy on Saturday. Ogilvy, who is an 14th year Junior this season, is a skilled, mobile big man who last year became the first sophomore to reach the 1,000 point mark in Vanderbilt's storied (clears throat) history. Boogie or Big Dan absolutely dominated AJ in their first meeting, holding him to 4 rebounds and 12 points, most of which came during garbage time late in the contest. I'm predicting that we'll see a lot of the same today....hopefully.

#44 Jeffery Taylor, 6-7, Sophomore, Wing Stats: 14.1 ppg, 5.4 rpg, 1.9/2.4 assist to turnover ratio This young man from New Me-he-co via Sveeeden had quite the freshman season and has continued that streak into his sophomore year. Last year he got to 6th on the Vandy all-time freshman scoring leader board and was named to the All-SEC freshman team by SEC coaches. This year he's avoided the dreaded sophomore slump by upping his scoring average and becoming Vandy's scoring leader. When the 'Dores visited Rupp earlier in the season, Taylor was held below his scoring average but still got 10 points.

#0 Jermaine "Dolla Dolla" Beal, 6-3, Senior, Point Guard Stats: 14.7 ppg, 2.9/1.4 assist to turnover ratio Beal is the senior point guard that you want on your team unless you have a one and done point guard who is better or another one or two and done point guard who is probably better too. In all seriousness, Beal is the gas that fuels the Vandy team bus and the glue that holds their team together. He's received a lot of praise lately for his protection of the ball and leadership abilities. He set a new sophomore assist record for Vandy in 2008 (158) and has since then upped his scoring averages and three point shooting ability. Let's hope that John and Eric can lock down Beal a little better than last time when he led Vandy with 19 points on 4 of 8 shooting from deep.

#1 Brad Tinsley, 6-3, Sophomore, Guard Stats: 7.7 ppg, 3.2/2.2 assist to turnover ratio Tinsley has mastered the art of "white trash sexy" and for this year's team pic he brought the noise by looking exactly like a slumming Vandy co-eds dream come true. On the court, his 69 three pointers last year tied the record for a Vandy freshman. This year he is still shooting it well but maybe not as well as last year. He's currently letting it fly at a 42% clip.

#24 Andre Walker, 6-7, RS Sophomore, Forward Stats: 5.1 ppg, 5.4 rpg, 58.1 fg% Walker is a gem in the classroom during the day but moonlights as Nashville's version of Teen Wolf. He's mainly a glue guy with a limited role in his teams offense although when he does shoot it, he usually makes it. Just don't piss him off and we'll probably be able to deal with this guy. Reserves that you'll probably hate on too: John Jenkins: The 6'4 freshman guard from Tennessee has made a name for himself early in the season as a major scoring threat. He's currently averaging 10.3 ppg. If he does get off a bit it'll be by way of the three, where he's currently shooting at a 45.2% clip. Festus Ezeli: Mr. Festus for the rest of us is a 6-11 redshirt sophomore center who plays quite a role for Vandy off the bench. The Nigerian native has added bulk to his frame and is ready to bang. He's averaging 3.3 rebounds and 4.0 points in only 12.9 minutes per game so far this season.