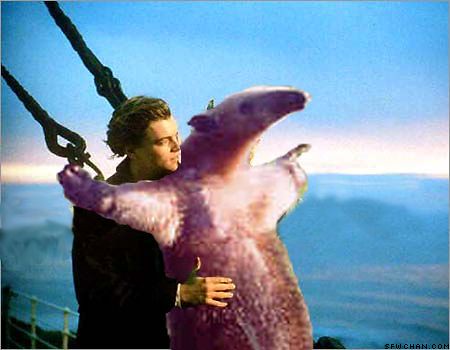 The sports schedule stinks right now. As you actively are avoiding anything basketball/sports related, remember that UK has a variety of other sports that would appreciate your fandom. Mondays are good days to plan out your week and make sure you don’t miss any of the UK-related action.

Monday (3/29/10) –Women’s Golf – Anteater Invitational – All Day: You gotta love the names of some of these tournaments. It is the Anteater Invitational because it is being run by several medium-sized, sloth-like mammals of the order Pilosa with long noses that enjoy slurping up insects. Actually, that description could apply to BTI as well. Anyway, the Anteater is the mascot of tournament host UC Irvine which shouldn’t be confused with Irvine, KY despite the similarities in cosmopolitan culture. This year’s women’s golf team is being led by a group of freshmen, Ashleigh Albrecht, Heather Lott, and Betsie Johnson (Colt Pride!), and are seeking to improve on recent struggles and shooting for a top ten finish.

Tuesday (3/30/10) –Women’s Basketball – Kentucky vs Oklahoma – ESPN – 9:07p: Oh, UK Hoops. A heart-broken Big Blue Nation turns its lonely eyes to you. BTI already gave the women proper props this morning, but we should again recognize the unreal talent of both SEC Player of the Year, Victoria Dunlap, and super freshman A’dia Mathies. At this point, the team is a comet scorching through the tournament and looks to take down the third seeded Sooners. Oklahoma has the experience (they went to the Final Four last year) and the fan support (they averaged over 10,000 fans for games in the tournament last year) to make life difficult for the Wildcats. Good luck to the ladies and make sure to settle in for this one that is being broadcast on ESPN.

Wednesday (3/31/10) –Baseball – Western Kentucky vs Kentucky – 6:30p: The baseball team has hit a bumpy road as of late. The Bat Cats were swept by 20th ranked Vanderbilt over the weekend. UK gets a break from SEC play with a couple of single games that will help the team regain their swagger. Tuesday, they travel to Cincy to take on the Bearcats and Wednesday they return for a homestand against the Hilltoppers. Kentucky is currently ranked 24th in the nation.

Thursday (4/1/10) –Men’s Nude Tiddlywinks – KSR vs CBS Sports – All Day: In what is expected to be an epic rematch from last year, the KSR blogger squad will take on the web-based reporters from CBS Sports. Greg Doyle led his team to a fantastic come-from-behind win last year and is looking to again showcase the rapid-shot squop technique that only a man of Doyle’s stature can master. Gary Parrish is claiming he has improved his go-to move, the patented “Faux Hawk In The Round”, by adding a bunny hop and swirl finish. The mind boggles. Matt Jones is countering with healthy additions to his squad from the Blogger Contest as well as super sub Anthony Wireman who finished third in last year’s North American Tiddlywinks Association (NATwA) tournament. Drew Franklin is looking to implement a new, Karate Kid Swan technique that is reportedly a breathtaking sight for someone with such a prodigious squidger. Early predictions set the over/under at 14 dry heaves to anyone unfortunate enough to witness the sad display that will be broadcast on Cable 10, Aurora, Illinois Community Access Channel. Take the over and recognize the date.

Friday (4/2/10) –Men’s Tennis – South Carolina vs. Kentucky – 4:00p: UK’s Men’s Tennis squad is currently ranked ninth in the country and smacked #37 Alabama around over the weekend. The win marked UK Coach Dennis Emery’s 500th win in his 28 years as HC of Kentucky tennis. Emery has 555 victories in all and is probably one of the most underrated coach at UK.

Sunday (4/4/10) –Easter Sunday – All Day: Time for one of my favorite comedians talking about the holidays.

That is about it for the week. Now. Does anybody know someone looking for some Final Four tickets? I have a few to sell.