Just when I thought there was no possible way the ending of the Indiana/Kentucky series could make its way back into the news, Tom Crean spoke out today about how the loss of the Kentucky game has "screwed up" Indiana's home and home situation. After months and months of debate, not only from Kentucky and Indiana fans, but also from the national media cohorts-- I thought the subject had finally been laid to rest. Apparently not. As with many events, people, trends, etc. we/the world often talk about things for far too long. We beat the proverbial dead horse into the ground. I started thinking about other things besides the IU/UK series ending that we/the world talked about for too long. Some of these things are UK-related, while others are very clearly not. Without further ado, a list of the things we talked about for too long... 1) Y2K I asked 5 different people to help contribute to this list, and all 5 of them answered with "Y2K" as their first response. Remember the old Millennium Bug that revolved around abbreviating a four-digit year as a two-digit year? I was mostly concerned that I wouldn't be able to play Oregon Trail every day and talk to my friends on AOL. 2) 50 Shades of Grey Every female either read this book, or lied about reading this book, or knew 5 other people reading this book... 3) The Great Gatsby Trailer/Preview I'm fairly certain that for 2 years, I saw this preview every single time I saw a movie in the theatre. "Youuuuu and meeeeeeee" 4) The O.J. Simpson trial The fact that my entire 4th grade class sang "Tootsie roll, tootsie roll, OJ Simpson killed Nicole!" and got in trouble for it shows how many people knew about and talked about the events surrounding this trial. 5) Manti T'eo/Manti Te'o jokes We all spent a lot of time following, tweeting, and making jokes about a non-existent woman/relationship. Every now and then someone will still attempt to make a joke or post a picture of an empty shower and label it "Manti T'eo's girlfriend in the shower naked." It's not funny anymore. And Andrew Wiggins is also not committing to Kentucky. 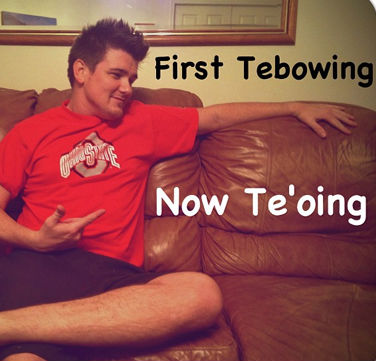 6) The Mayan Apacolypse See Y2K above. Same story, different year. 7) Kevin Ware's injury Take nothing away from the horrific nature of the injury or how neat it was to watch his teammates rise up around him...but by the time the national championship was over, I think we were all ready to take a break from the Kevin Ware news. 8) NBC's delay of the summer Olympics People. Were. So. Mad. About. Finding. Out. Gabby. Douglas. Won. Too. Before. They. Got. To. Watch. It.  Me typing like that was almost as annoying as people tweeting how angry they were for getting on Twitter and scrolling through their timeline when they knew it would ruin the surprise. 9) Kony 2012 I think I am the only person who didn't watch the video. What did I miss? 10) LeBron James' "The Decision" You've heard this story not 2,000, not 3,000, not 4,000, not 5,000, not 6,000, not 7,000... but 8,000 times... 11) Tim Tebow Skip Bayless. That is all. 12) Jay-Z and Beyonce's baby Just because secretly we all kind of wished we could be this baby, didn't mean we had to obsess over it/the name/the first picture for 9 months.

13) Arrested Development Season 4 on Netflix  Oh my gosh, have you heard? 14) Patrick Patterson and Jai Lucas' commitment Here in the Kentucky basketball world, this was the internet sensation that helped KSR evolve into what it is today. People couldn't get enough information and the rumors were flying left and right. 15) Andrew Wiggins' college decision Wiggins' drawn out college decision was 1 part awful and 1 part great. In an off-season without a national championship to bask in, and without a Kentucky baseball team's run to follow... at least Andrew Wiggins gave us something to follow and talk about in the lackluster summer days. 16) "Joker Phillips should be fired" talk The debate/talk was constant for the last 2 years of Phillips' time here at Kentucky. 17) Breaking Bad and The Walking Dead It seems like people kind of like these shows. Or so I hear. 18) The release of the iPhone 5  Remember when they said the iPhone 5 was going to have a holographic screen or something like that? 19) The Royal Wedding  For my Mom, this was as big as the Andrew Wiggins decision. In fact, maybe even bigger. I was working at a mental hospital at the time that the Royal Wedding happened. When I walked into the "dayroom" at 6 a.m. for work that morning and all of the male patients were huddled around the TV watching the Royal Wedding coverage, I knew it was a big deal. 20) Tickle Me Elmo The creators of this toy Punk'd the entire world. Why were people so obsessed with these things? 21) H1N1/SARS

22) Taco Bell's new Cool Ranch Doritos Tacos Sorry Drew. 23) Tiger Woods First it was the affair. Then it was the injury. Then it was the comeback. It feels like we are always talking about Tiger Woods in one capacity or another. 24) Planking When my Mom started sending me pictures of herself and my Aunt planking at various spots during a road trip to Florida, I knew that it was time to retire the trend. 25) The new high rise in Lexington, or lack thereof... The last time I checked, there's still a huge chunk of green grass in the middle of downtown Lexington.