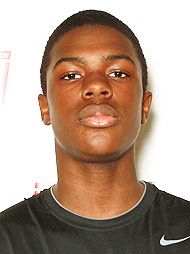 It's not everyday we get to see a future UK football player in a nationally televised game. Last night, UofL's future QB Kyle Bolin of Lexington Catholic got waxed on TV. Today, you can flip it to ESPN to watch UK football commit Jalen Battle play...right now! The game started at 3pm, so hurry on over to your television. Jalen is a 6-3, 185 lb kid in the class of 2013. His University School of Nova South (Ft. Lauderdale, FL) is currently battling Trotwood-Madison High School near Dayton, OH. This 2-star safety will come into Lexington next year hungry for some tackles. His teammate, Dionte Taylor, is a 2013 3-star 6-0 165 lb wide receiver who is currently considering Kentucky, along with about 20 other schools (including Louisville, but that'll change after the Cats get the W one week from day). Jalen's opponent, Trotwood-Madison, has a couple UK connections as well. The squad is coached by Maurice 'Mo' Douglass, a former Kentucky football player who was drafted by the Bears in 1986, where he played the majority of his decade-long career (brief stint with the Giants in '95-'96). Douglass' team features a 2014 4-star receiver with a UK offer, too: Verondtae Wilkinson. Keep an eye out for this kid. Battle's team is currently up 19-0 at halftime, which is much better than how UofL's Bolin fared last night. I've got no clue how well he is doing, but here is a little video clip of Jalen Battle to hold over all you folks who can't tune in: