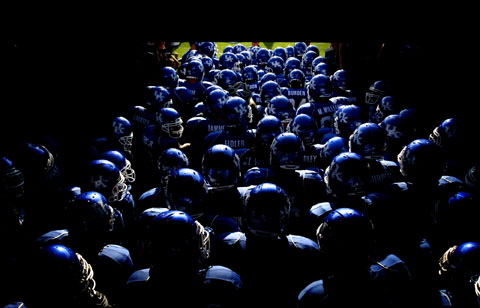 Saturday's beatdown of the Hoosiers at Rupp apparently didn't do too much to reassure antsy basketball fans that the team is making strides in the direction (based on comments here), but it was used to host several football recruiting targets according to Chip Cosby.  According to the king of the UK football beat, the Cats hosted six 2009 prospects, two of whom was already committed to the Cats.  They were: Chris Matthews  WR Matthews is a 6-5, 210 pound wideout from Los Angeles Harbor Community College and is a four-star prospect according to Rivals.  Matthews had 32 catches for 529 yards and 4 TDs this year, which was down slightly from the previous year's numbers of 44 catches for 700 yards and 8 TDs.  Matthews runs a 4.5 and Rivals says he's been offered by Memphis, New Mexico, Akron and Marshall.  ESPN says he's being recruited also by Oklahoma, Kansas State, Oregon and Nebraska.  He is currently ranked as Rivals' #9 JUCO player.    DeQuin Evans  DE Evans, a teammate of Matthews at Harbor Community College, checks in at 6-2, 275 and runs a 4.6 40.  This season, he registered 33 tackles, 14.5 of which for a loss, and 4.5 sacks.  He has been offered, according to Rivals, by Arizona, Arizona State, Kansas, Kansas State, Oregon, Washington State and Nevada.  He also has a great mustache. Brian Adams  WR This 6-4, 210 pound athlete from Cumming, Ga. will arrive in Lexington exactly 40 years after he got his first real six-string at the Five and Dime. He’ll also bring 4.5 speed and athleticism along, which will likely put him at wideout instead of the quarterback position that he’s played at South Forsyth High School. He chose the Cats over Vanderbilt back in June. Jared Picket  ATH Picket, who to my knowledge never played basketball at UK, is a 5-9, 178 pound athlete from Texas and might be the first player I've ever researched to play for a team with an official MySpace page.  Not a lot of info out there about him, but someone left a comment back in October that said "wat's yall record now 0-4 dam yall suck this year".  Pickett plays running back and, interestingly, has already committed to Houston.  Justin Bean  WR Bean is a 6-2, 180 pound wideout from Tupelo, Mississippi and has already committed to the Cats.  Bean runs a 4.55 40 and picked UK over Ole Miss, Mississippi State and LSU. Chad Bumphis  WR Bumphis is a 5-11, 185 teammate of Bean's and ranks as a four-star on both Rivals and Scout.  Bean runs a 4.4 40 and has been offered by Florida, Alabama, Ole Miss, Mississippi State, Tennessee, Texas Tech and Auburn.  ESPN has a great write-up on him including a video.  He would be a HUGE get for the Cats. So, what do you think about Liggins?