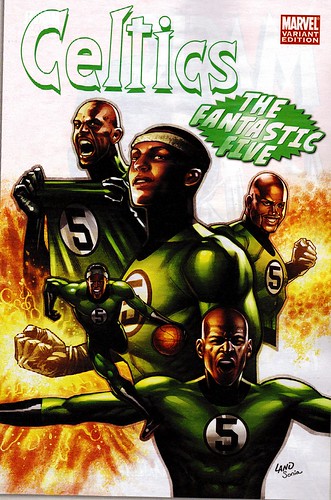 Ooooh. And the Lakers are Yellow. See how that works? Lore, LOL! So ESPN The Magazine came out with a special issue this past week whereby they leveraged their economies of scope and scale by having Marvel comic artists draw up each team in the NBA. See, ESPN is owned by ABC who is owned by Disney who recently purchased Marvel and has a contract to show NBA games. SYNERGY! Anyway, if you think a guy that blogs might be slightly into comic books, you win! I could feel Fake Gimel's euphoric nerd spasm from 3 counties away. It is a great time to put the ones of UK players up because it is also Halloween and the players look like they are wearing costumes. YOU AREN'T THE ONLY ONE WHO CAN PLAY THE SYNERGY GAME, ESPN! We'll start with the current best UK player in the NBA today: Rajon Rondo. When I first saw this, I thought it was Green Lantern based. Then I remembered that Green Lantern is a DC comic rather than a Marvel and the dork patrol showed up and revoked my membership. This is actually based on The Fantastic Four that they expanded to the Fantastic Five because of the addition of the Big Shamrock (Um. . Shaq. In case you weren't keeping up with his nicknames). Pretty well done and considering how often Ray Allen disappears in big playoff games, I guess he can be Sue 'The Invisible Woman' Richards. HEEEYYY OOOOO! I think I just got my membership card back.